Shop our Holiday Gift Guide - Get a gift for every cyclist in your life! 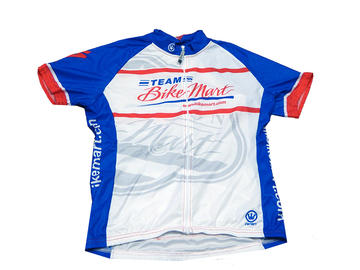 This is Team Bike Mart apparel. For more information on what we do and how to join, click the links on the right.

Jim Hoyt had an idea about starting a team for the MS 150. At that time there were about 10-18 corporate teams that were raising some good money, but that was not good enough for Jim. So Team Bike Mart.com was formed in late 2001 for the 2002 ride season. It was inspired by Jim and Rhonda Hoyt and long time friend and road bike racer Steve Mailman. Steve was diagnosed with multiple sclerosis in 1990. The team that was started in Steve Mailman's honor had a mission. The goal was to raise a lot more money to fight this terrible disease.

We want you, your friends, your neighbors and your family on Team Bike Mart. These are fun events and raise money for great causes. What great weekends - riding your bicycle in some of the best organized and supported events in the country. Even though we have a fun filled weekend, the real purpose of these events is to raise as much money as possible to aid in finding a cure for these devastating diseases.

"Joining Team Bike Mart for some of the recent rally rides has helped me gain a lot of confidence and given me the encouragement I needed to ride a whole lotta miles that I would never have thought I would cover. From training rides to the actual event, with the group's friendly camaraderie and support, I really felt like a part of a team and look forward to pedaling more miles alongside Team Bike Mart. Thanks you!" - Anne (May 2013)

Here are the details for the 2014 Team Bike Mart Program

How to join the team - all that is required to be part of the team is to register for one of the four events we do and choose Team Bike Mart as your team affiliation. There is no cost to become a team member other than the fees associated with participating in the event.

Clothing - TBM members will receive a 30% discount on the new TBM jersey and bib shorts. The jersey is available in both men's and women's. The bibs are available in men's sizes.

Parts and Accessories - 15% discount on parts and accessories is extended to TBM members. This discount is good from the date they register for that event and expires the day of the event. See RBM for exclusions.

TBM clothing is available for purchase by anyone and will be displayed on the sales floor. Only TBM members get the 30% off TBM clothing.